DLP, or digital light processing, uses tiny mirrors to reflect light toward the screen (an "on" pixel) or away (an "off" pixel). Most models use a color wheel -- literally a spinning wheel with color filters -- to create sequential color. Some high-end models use three DLP chips; one each for red, green, and blue. DLP projectors range in price from a few hundred dollars to tens of thousands, and more. Most projectors in movie theaters use DLP. You can find models from InFocus, Optoma, BenQ, Mitsubishi, and many others. DLP is also better for fast action such as sports as it has less blurring.

LCD, which stands for liquid crystal display, is very similar to the technology found in most TVs. LCD projectors use three liquid crystal panels, each tasked with creating an image using just one of the primary colors (red, green, and blue). All three are projected on the screen at once, so you see a full color image. LCD projectors range in price from a few hundred to several thousand dollars, and are available from companies like InFocus, Epson, Panasonic, and others.

LCoS, or liquid crystal on silicon, is sort of a hybrid between LCD and DLP. It uses liquid crystal chips with a mirrored backing. So they're reflective, like DLP, but block light using liquid crystal, like LCDs. Sony and JVC are the primary manufacturers of LCoS projectors, which they call SXRD and D-ILA, respectively. LCoS projectors range in price from a few thousand dollars to a few models that are in the tens-of-thousands range.

What is contrast ratio and why does it matter?

Contrast ratio in its simplest form is the ratio of the light reflected from an all white image and an all black image. So a projector with a 3000:1 contrast ratio means that the white image is 3000 times brighter than the black image. The higher the contrast ratio, the more detail you can see on the projected image whether its numbers, pictures, graphs, text, or video. Contrast is what makes it possible for us to see the subtle shades of colors. So good contrast is all about seeing the details.

Although there are many electronic techniques used to increase apparent contrast, the biggest factor affecting contrast will be your classroom. Room light is the enemy of contrast. It only takes a small amount of room light to drop contrast dramatically regardless of the contrast ratio of your projector. It doesn't matter whether the projector has 10,000:1 or 1,000:1 contrast. Turn on a light and you can hardly tell the difference between them. 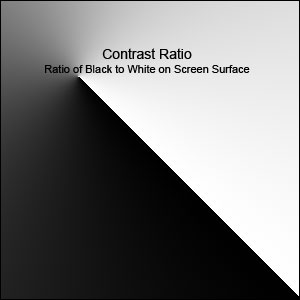 There are four things in your viewing room that will have a profound affect on contrast.

Uncovered windows - cover them if you can.

Lights in the room - turn them down if you can.

The color of your viewing room walls, ceiling and floor - the darker the better.

Your screen - use a projection screen rather than a wall or chalkboard.

Assuming you've done all you can for the four items above, your last weapon of defense is a bright projector. A bright projector can minimize, but not eliminate, the impact of the extraneous light sources in your room. So if this is your situation, look for a projector with high brightness (lumens).

Another View- Why Contract Ratios Do Not Matter

For some time now we (projectorcentral.com) have been recommending that you ignore contrast specifications when shopping for a projector. Why ignore contrast specs you wonder? Well, simple. They are the most worthless, misleading, uninformative spec on the sheet, that's why. They don't tell you much about what you should expect to see on the screen, and they certainly don't tell you anything about how one model will compare to another.

Now, lest anyone jump to erroneous conclusions, I am not suggesting that vendors are publishing distorted specs that are intended to deceive. Far from it. In fact, many of the published specs seem to be reasonably accurate as far as they go. But even if all contrast specifications were perfectly accurate, they would still be pretty much worthless.

Why are contrast specs worthless?

Several reasons. First, contrast on projectors is not measured on an "apples to apples" basis. Some projectors have dynamic irises that open and close depending on the average light level in a given scene. Some have dynamically changing lumen output of the lamps. Some projectors have color wheels with white segments that can be turned off when black is displayed. Other projectors don't have these features. These operational differences mean that the contrast ratings are influenced by a lot of unstated variables. Of course, they might be accurate as applied to each particular projector's mode of operation, but they tend to be meaningless as points of comparison between models.

Second, excellent gray scale performance is at least as important, if not more important, than contrast in delivering great picture quality. Imagine you had a projector with a contrast rating of a million to one, but all it could do was show deep black and brilliant white without being very good at distinguishing subtle shades of gray. You'd have the deepest, richest black level ever, which is what a lot of people think of as the key to home theater Nirvana. But you'd still end up with a terrible picture, and you'd surely never know it from the contrast spec.

Third, even beyond the problem of getting apples-to-apples contrast ratings, and not having a clue about gray scale performance, there is a much bigger issue: Your ultimate perception of contrast on the screen is not determined solely by the inherent contrast potential of the projector. Unless you have a totally black room, your perception of contrast will be influenced by reflected light in the room, any ambient light in the room, and by the lumen output of the projector. By reflected light, I mean the light that bounces off the screen onto white ceilings and light colored carpets and furnishings, and back onto the screen.

In addition to light reflected and bounced from the screen, most people have ambient light in the room as well. This is light from any other source than the projector's lens. That could be lamps, track lighting, windows that cannot be blocked, status lights on the equipment in your rack, light leaks from the projector's vents, etc. Once this type of light becomes part of the equation, and it doesn't take much, actual contrast ratios on the screen drop to a mere fraction of the projector's potential.

Your viewing room. The hypothetical "ideal" viewing room for a front projection system would be totally black. It would be covered wall to wall and floor to ceiling in black, non-reflective fabric. All furnishings and drapes would be black. And if you had this type of viewing room, the contrast ratings on projectors might be relevant to some degree once you sorted out the differences in how they were being measured.

In practice, nobody has a pitch black viewing room covered in black, non-reflective fabric. For one, there is no such thing-even black velvet reflects some light; if it didn't, you wouldn't be able to see it, or to detect any substance or texture in it. Furthermore, nobody we know would buy a projector if you needed a pitch black room to get an enjoyable picture anyway. Certainly, people who are quite serious about large screen home theater will take reasonable steps to darken a dedicated theater room, using darker fabrics and wall paints. But even in this type of room you can end up with enough light bouncing around to compromise the contrast potential of the projector. And the fact is, most people don't want to install room-darkening features at all. They want to use their multi-purpose room for things other than movie viewing in the dark, so they retain friendlier, lighter colored walls and furnishings. In this type of room, you can still get a great picture, but the contrast rating of the projector has less to do with it than you might imagine.

Lumen output. If you've got light in the viewing room the easiest way to overcome the problem is to use a projector with higher lumen output. It might seem counterintuitive at first, but a bright projector with a comparatively low contrast rating can often produce an image that appears to be higher in contrast than a projector with an extremely high contrast rating, but lower brightness. This is because the light in the room often defines the minimum black level on the screen, while the lumen output of the projector determines the brightness of the highlights. In this situation, the projector's lumen output, not its contrast ratio, is mostly responsible for the actual range between black and white you see on the screen.

The effect of brightness on perceived contrast is easy to see just by moving a projector closer to the screen and shrinking the image size. As the projector's light is concentrated on a smaller area, the highlights get more brilliant while black levels, relatively speaking, stay about the same. The projector is not inherently any higher in contrast, but the image appears to be higher in contrast because there is an expansion of the luminance range between black and white. When light in the viewing room determines the level of black, the way you get a higher contrast image is to make the highlights brighter.

Now, there is a limit to this. Using a super bright projector in a dark room will give you eyestrain and a headache after a while. A rapid transition from a dark night scene to bright daylight scene can produce a jarring change in light energy on the screen that is distracting if not painful. Some people are more light sensitive than others, so there is no ideal or correct lumen output to compensate for any given level of reflected light. But if 400 ANSI lumens is a good amount of light for a 120" screen in a dark room, then 600 to 1000 lumens would be satisfying for most people in a room with a modest amount of ambient light. Ultimately, it is a matter of personal taste-finding that level of picture brightness that looks engaging and comfortable to you is the real objective.

Now that we have considered how misleading contrast specs can be, let's look at how they are generated, and how to interpret them.

How to Interpret Contrast Specs from ProjectorCentral